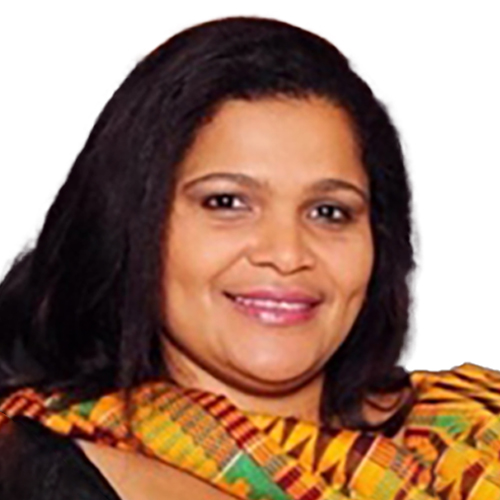 Ambassador Johanna Svanikier is Founder, President and CEO of the Heritage and  Cultural Society of Africa Foundation, HACSA-USA and HACSA-Caribbean. The HACSA  Foundation is an NGO, non-profit, social enterprise with a mission to preserve, advocate  for and promote the use of African heritage and culture for social and economic progress  and community development in Africa and the Diaspora. In March 2017, Ambassador  Svanikier organised the hugely influential African Diaspora Homecoming Conference to  celebrate Ghana’s 60th independence anniversary in a memorable and meaningful way.  This seminal event inspired “the Year of Return” and was followed by the HACSA Sankofa  Summit 2019, which symbolically commemorated 400 years since the transatlantic slave  trade began.

Ambassador Svanikier is Ghana’s recent past Ambassador to France & Portugal and  Permanent Delegate to UNESCO and La Francophonie. During her tour of duty in Paris,  she initiated Ghana’s membership of the OECD Development Centre where she  represented Ghana on the Governing Board. Ambassador Svanikier chaired the ECOWAS  Group at UNESCO from 2014 to 2015 and successfully campaigned to win Ghana a seat  on the UNESCO Executive Board. She also organised a delegation from France to Ghana  led by the Prime Minister of France.

She was the longest serving non-executive director of Fidelity Bank Ghana and Fidelity  Asia Bank. During her 12 year tenure, she initiated and chaired subcommittees on  Remuneration and Staff Welfare and Technology. She also initiated the Fidelity Bank  Women’s Forum which evolved into the Orange Women’s Network and which other  institutions were inspired to follow. In 2020 she became a non-executive member of the  board of DreamOval, the fastest growing indigenous Fintech company in Ghana.

In 2012, she was appointed to serve as a Commissioner on the National Development  Planning Commission (NDPC). She has also served on the Petroleum Revenue Advisory  Committee of the Ministry of Finance and on the Advisory Board of the Ministry of Lands  and Natural Resources under two administrations. She was appointed to the board of the  National Commission on Culture in 2017 and invited to sit on the Council of Patrons of the  Ghana Culture Forum. She is also a member of the Board of the Economic Club of Ghana  and chairs the Advisory Board of the Oxford University Africa Society in the U.K.

Ambassador Svanikier is a lawyer and qualified barrister by profession and was called to  the Bar of England and Wales at the Inner Temple in 1990. She also qualified as a Solicitor  and Advocate of the Supreme Court of Ghana. She has previously been a university  lecturer with the Faculty of Law at the University of Ghana, Legon, and a legal and  development consultant. She is founder and was the first Director of the Human Rights  Study Centre at the University of Ghana.

She holds Bachelors and Master’s Degrees in law from the London School of Economics,  UK, a Master’s in Public Administration from the Harvard Kennedy School, U.S.A. and a  Masters in Political Science and International Relations Research from the University of  Oxford, U.K. She was a Fulbright Scholar during her time at Harvard University and is the  author of several publications including “Women’s Rights and the Law in Ghana.”

Ambassador Svanikier is a regular speaker at conferences and events and was  recognised by Humanitarian Awards Global as among the 100 Most Influential Change  Makers in Ghana in 2021. She is passionate about history, heritage and culture,  technology and innovation, women and youth empowerment and environmental  protection.